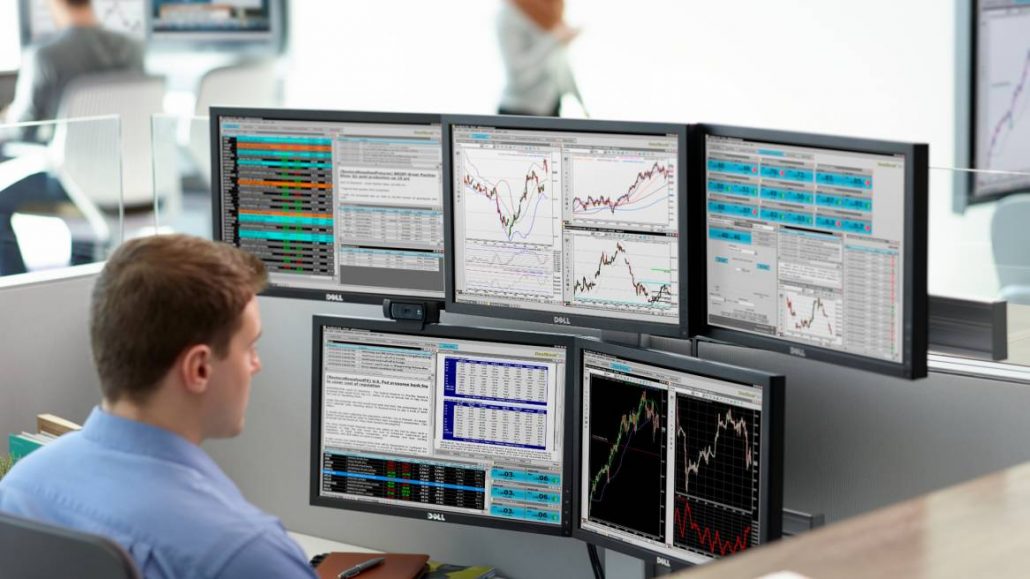 By Marius du PreezDecember 13, 2017No Comments

There are several benefits of multiple monitors that can boost business productivity.  At least that what scientists from the University of Utah have shown with their studies on the subject.  A study at the U of U found that productivity among people working on editing tasks was higher with two monitors than with one.  Other research indicates that the addition of a third monitor can also offer further increases in productivity.

The major area where time is saved and productivity boosted is in toggling between screens.  Evonne Roman discussed this a recent article on the subject,

“It takes about 1.5 seconds to move your mouse and click to switch between documents. After double clicking, the average delay time for the next document to open is 0.5 seconds, totally in about 2 seconds. If you need five numbers from each source document for your report, a second monitor would save you 66 seconds each time you compile your weekly report. Over the course of a year, a second monitor would save you about an hour on this one task.

While saving 1 hour a year doesn’t sound like that much, how much time would a second monitor save you if you used it for all of your tasks? According to the University of Utah, a second monitor can save each employee 2.5 hours each day if they use it for all of their tasks. If you have 30 employees, a second monitor saves you 75 hours a day, 375 hours a week, 1650 hours a month, and 18,825 hours a year. Even if you’re paying these employees a minimum wage of $7.25, which you’re most likely not, you’re still saving at least $136,481.25 a year.”

Most business owners I know would love to have that kind of money back in their pockets.

It’s been shown that going from one to two screens can give us a significant productivity increase.  Are there advantages of going from two to three?  Is there a point of diminishing returns where our ability to focus and potential distractions are diminished by the deluge of data?

Another recent study from Fujitsu showed that a 3-monitor setup can offer even more productivity.  The study was called the Office 21 research project.  The researchers began a test with 67 people, and did a control group where they completed the same task at a conventional workplace with a 19-inch display.

The researchers calculated a benchmark performance score to test against.  They then divided the participants into three groups.  Group 1 had a 19-inch display, group 2 was given a 22 in widescreen display, and group 3 was given three displays.

Group one increased productivity on the task by 1.9% (based on the learning effect), group two increased efficiency by 8.4%, and group three were 35.5% more efficient in completing the task.  All the research taken together show that going from one to two monitors increases efficiency about 20-25%, and from two to three monitors can take you up to a 35% increase.

There does seem to be a diminishing rate of return after this.  David E Meyer, a psychology professor at the University of Michigan that studies the effect of multi-tasking on productivity warned that productivity can suffer when people keep getting interrupted or pulled off completing a task.

He was recently quoted in the New York Times on the subject, ““There is ‘thought-killing’ going on,” Professor Meyer said. “Rome crashed and burned because it got too big. Go past that scale and you’re going to wind up like Rome.”

It’s also important to remember that some jobs benefit much more from having additional screen real estate than others.  Jobs that involve tasks such as data entry, drafting email with source material, writing, spreadsheets, comparing documents side by side, or other business communications can see huge benefits.  Other professionals that do less administrative tasks of this type may not see the same productivity increases.

With minimal investment, business owners can help their staff get more done in less time.  They can help their bottom line by simply giving their employees more digital space to work in.